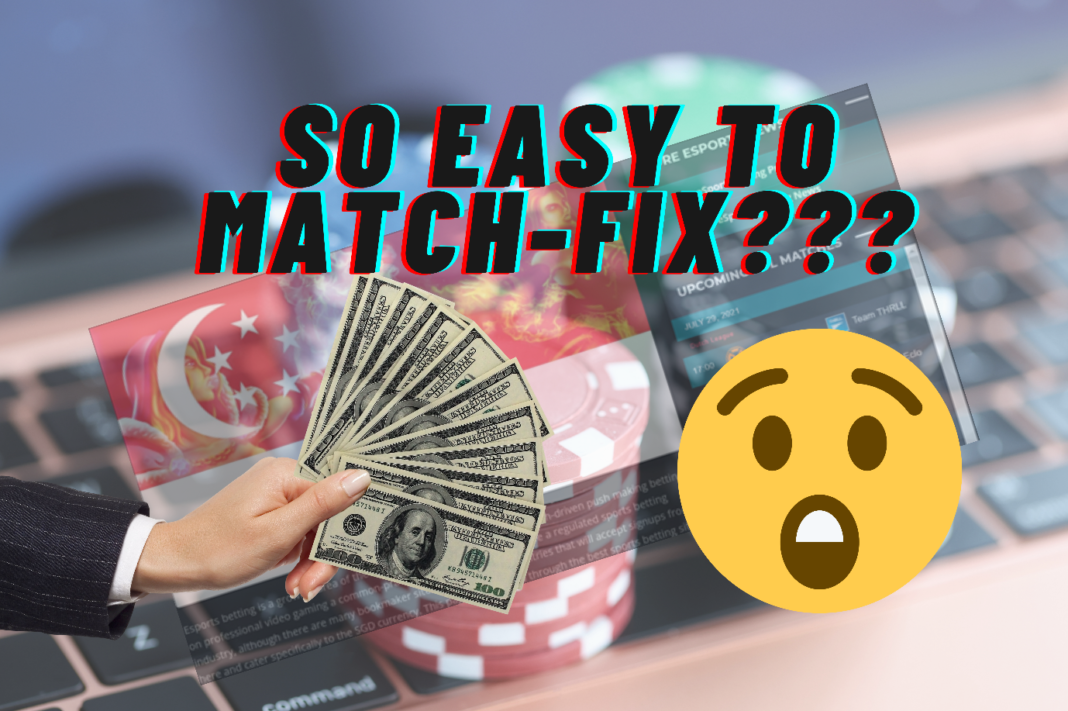 In the second part of our interview with a teammate of a match-fixer, Ulti finds out how to throw a match.

How many players in a team does it take to fix a match? Where do you place your bets? And most importantly, how do you avoid getting caught?

“Money is the root of all evil,” said Xavier (real name withheld), whose teammates were caught for match-fixing

It may seem a cliche, but Xavier has seen first-hand how the temptation to make quick, easy money has forced even teammates he trusted to go rogue. Throwing a match can be hard to say no to, especially when the act really isn’t rocket science.

“It is quite simple to start match-fixing,” he said.

First, the players on the same team just need to talk among themselves if they are going to do it – the opposing team is not involved at all.  But it isn’t “one man’s job” and usually involves the whole team or most of the players at least.

Next comes the placing of the bets. In places like Singapore, offshore or online bets are illegal and there are no lawful avenues to bet on esports domestically.

“However, there are many bookmaker sites based in other countries that will accept sign-ups from here and cater specifically to the SGD currency,” revealed Xavier.

A check by Ulti online showed this to be true, with websites even offering 50 per cent matched deposits on up to US$5,000, and wagers available on a wide range of games and competitions, from Dota2 and CS:GO to League of Legends. An array of deposit methods are also available, such as credit cards, debit cards, and web wallets like Neteller and Skrill. Even cryptocurrency can be used. With a virtual private network (VPN), geo blocks are easily bypassed.

After the bets are placed, comes perhaps the most challenging part – avoiding detection.

Keeping the plan discrete from management is key, said Xavier. After all, esports outfits would loathe to have their reputation ruined by a match-fixing scandal. It is important to keep the plan within the team and not involving any external parties.

Come match day, the gameplay strategy for a match-fixing team is to “play normally, but not at their best”, said Xavier.

In fact, he knows this too well, as he did not think his team mates were match-fixing even after their loss. Unlike cheating, where the use of aim bots for instance are more apparent, Xavier said it is difficult to tell if the player is throwing or just having a bad day.

But there may be some tell-tale signs if you look hard enough. “An example would be purposely pushing the opponent if we have a man advantage, disregarding the calls made, or losing to an opponent even if you have the angle to kill him easily,” said Xavier.

Yet ultimately, it is hard to prove that a player has thrown a match. Overwhelming evidence such as text messages or money transfers may be required to determine guilt.

When it is this easy to throw a match, plenty hinges on a player’s self-control.

And while there may be short-term benefits, the consequences of being caught can be career-ending and life-changing. Lengthy and sometimes lifetime bans aside, the damage to an esports athlete’s reputation, integrity and character may see the person having a difficult time switching careers. A simple Google search by a prospective employer will reveal a dark past.

Xavier said: “It heavily depends on oneself: Whether one will uphold the integrity, responsibility, and discipline as a professional gamer, or succumb to greed and rig the game for monetary benefits while risking one’s career.

“For me,  match-fixing is a choice that never crossed my mind.”

What do you do when you unknowingly gain 10K subscribers? NCHProductions tells us what...