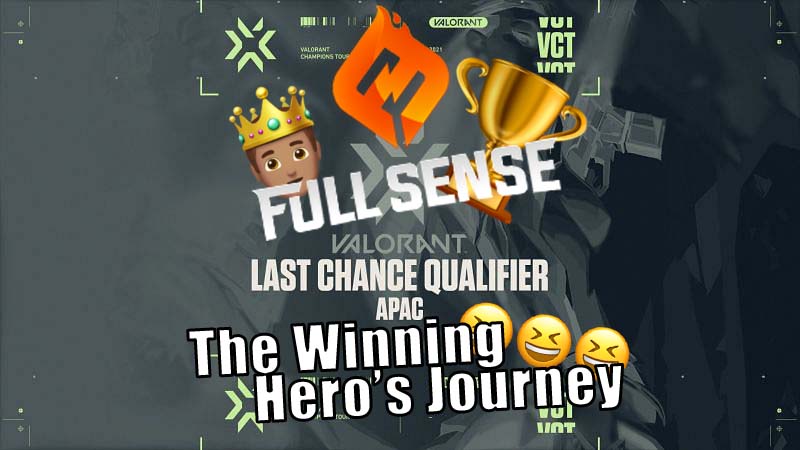 Hailing from Thailand, FULL SENSE’s Valorant rooster officially debuted in February 2021, over half a year after Valorant’s release. However, this roster wouldn’t stay long. In April, the entire team saw new faces. With the promotion of Nattawat “SuperBusS” Yoosawat to the active roster, the team was finally settled (for now) in June.

But, in the Valorant Championship Tour (VCT) 2021: APAC Last Chance Qualifier, they gave SEA fans a reason to celebrate. The current FULL SENSE line-up won gold at the tournament.

With that win, they earned a ticket to Berlin to enter the FIRST EVER Valorant Champions 2021 — Riot Games’ world championship for Valorant.

Their run so far was like a typical Hollywood underdog story — easily my ‘Rocky’. All the week-long ups and downs made their win taste that much sweeter. For those who missed out, here’s what happened:

FULL SENSE started the tournament with a bang, trumping both REJECT and NUTURN Gaming in 2-1 matches.
They clear have boatloads in the skills department. Chanawin “JohnOlsen” Nakchain showcased his steadfast nature when he killed REJECT’s Yusuke “NoriseN” Shima with mere seconds to spare before he himself was off-ed.

And as a testament to the group’s teamwork, Elamrahim “LAMMYSNAX” Khanpathan was shot dead, halfway through defusing a spike, but managed his brign his attacker with him. With literal seconds left, John Olsen brought it home and completed the defusion.

As they advanced to the Upper Bracket Final, they experienced their first bump. They barely squeaked a victory from Game 1, scoring 13-11 against Japan’s Northeption. But it went downhill from there.

Turning the tides, Northeption thrashed them in the following games. In the last round of Game 3, FULL SENSE were expertly executed within a 12 second window! Their first loss in the tournament was brutal, dropping them to the Lower Bracket Finals.

Threatened with elimination, they no doubt were filled with rage and determination. They had to win this match against Korea’s DAMWON Gaming. Digging in their heels, they did just that.

It should’ve been a sign when FULL SENSE got a flawless win from the jump. Following Kititkawin “PTC” Rattanasukol’s lead, they slaughtered DAMWON without losing any member. They continued to relentlessly decimate DAMWON, winning a clean 2-0 match. With this victory, they gained the chance at redemption as they moved to the Grand Finals.

Welcome to Round 2 of FULL SENSE VS Northeption! Everything rode on this match and both teams were well aware of it. Neither were going to back down.

But, by the end of Game 3, they were behind, 2-1. One more loss and they would be out. The atmosphere in their Gaming House would have been rife with pressure and tension.

Northeption proved to be a formidable opponent. Upon setting up barriers, Chanitpak “ChAlalala” Suwanaprateep was set up to defuse the spike but Northeption got the upper hand. Along with Nattawat “SuperBusS” Yoosawat, FULL SENSE were frustratingly wiped out in Round 24 of Game 3. The show must go on though.

FULL SENSE pushed through and made a stunning recovery. PTC flexed his near-perfect sniper skills when he took out most of Northeption in Round 13 of Game 4. It would be scary if it weren’t so impressive.

In the final round of Game 5, LAMMYSNAX delivered the final blow to last standing Northeption man, Tenta “ten” Asai, crowning them as the winners. They’ve gotten their revenge! Witness the winning moment here:

This is an euphoric moment but it’s not the be all, end all. Next stop, Valorant Champions 2021! It’s likely the team will be bootcamping in either their Gaming House or in Berlin. They’ll join fellow Thais, X10 Esports, and Philippines’ Team Secret in December.

It’s always great to see more SEA representation on the world stage. They’ll surely want to make their mark in the first edition of Valorant Champions. FULL SENSE, you have our FULLest support! Congratulations and all the best, guys.