ultiasia
Home Games League of Legends Is it time for Garena to pass the LoL torch back to... 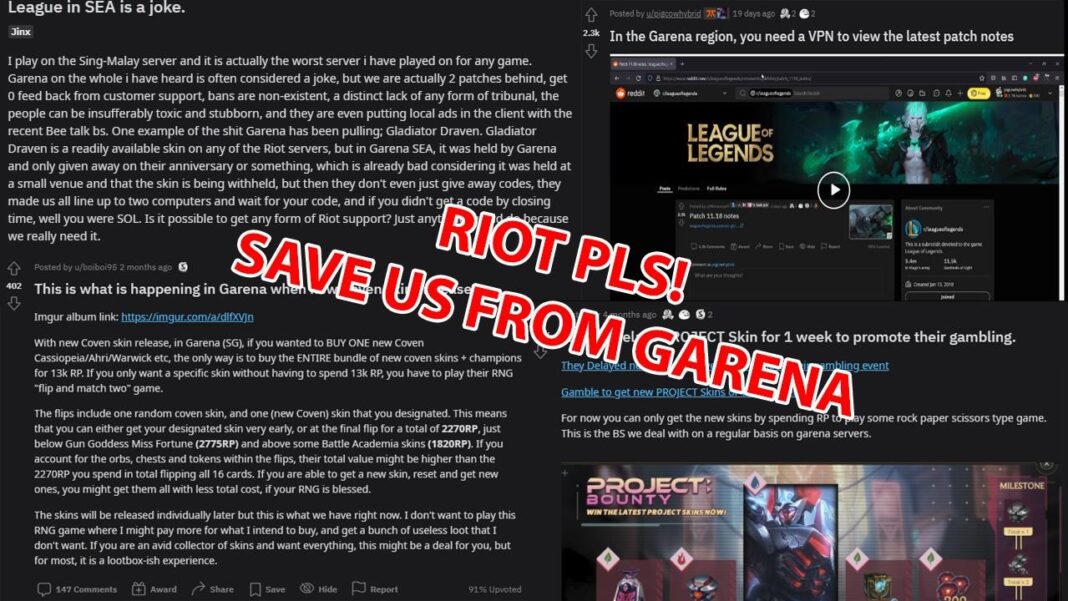 As hype for the League of Legends Worlds 2021 continues to amp up, there seems to be one very sore spot slowly growing in size in Southeast Asia (SEA).

For one of the biggest esports tournaments of the year, SEA is left in a corner watching with no team to root for, only living vicariously through the PCS Seeds, PSG Talon and Beyond Gaming.

Ever since the PCS was introduced and the pandemic hit, there has been zero SEA representation at any international competition.

With governmental restrictions as well as lapses in management of the VCS, Vietnamese teams, SEA’s only hope has been denied not once, not twice, but up to FOUR times their international appearance. While it can be forgiven that teams are not able to participate once or twice, 4 different instances of lapses seem intentional, bordering on malicious.

In stark contrast, Riot Games has been able to organise and run their Wild Rift tournaments with near zero issues in Vietnam and if they do qualify for the upcoming Horizon Cup, they are slated to play in Singapore’s Suntec Convention Centre.

The SEA region of League of Legends is run by Publisher Garena, a subsidiary of multi-million-dollar company (ironically also named) Sea. Ever since the launch of their flagship shopping app, Shopee, it has become obvious that the company’s priorities shifted from gaming to ecommerce, leaving avid SEA gamers in the dust.

Every now and then a Reddit thread pops up citing mismanagement from Garena as well as predatory promotions; all of which have zero PR reply from the Singapore-based publisher. It is crystal clear that the region isn’t happy with their publisher and there is nothing Riot Games can do about it except wait for the publishing contract to expire.

Ironically, their best-performing game, Free Fire, doesn’t have much of a presence in SEA (other than Thailand), despite it hitting World Record Viewership in their recent World Series outing. Friendship ended with SEA. Brazil, Russia and India are their new best friends.

A quick search shows that League of Legends generated a revenue of US$1.75 billion in 2020 with about 30 million players playing daily. It is apparent that the game is still extremely popular and profitable. Unfortunately for SEA, they don’t get to enjoy a piece of the pie.

If Garena isn’t all that interested in investing in the players, esports and the game, perhaps it is time for the parent company of Riot to take back its lost child.

Singapore can wait: EVOS coach wants to become a legend before going home

We ranked the BEST 3 Worlds Songs