ultiasia
Home Games Axie Infinity NFTs are about to revolutionize the gaming world, here’s how 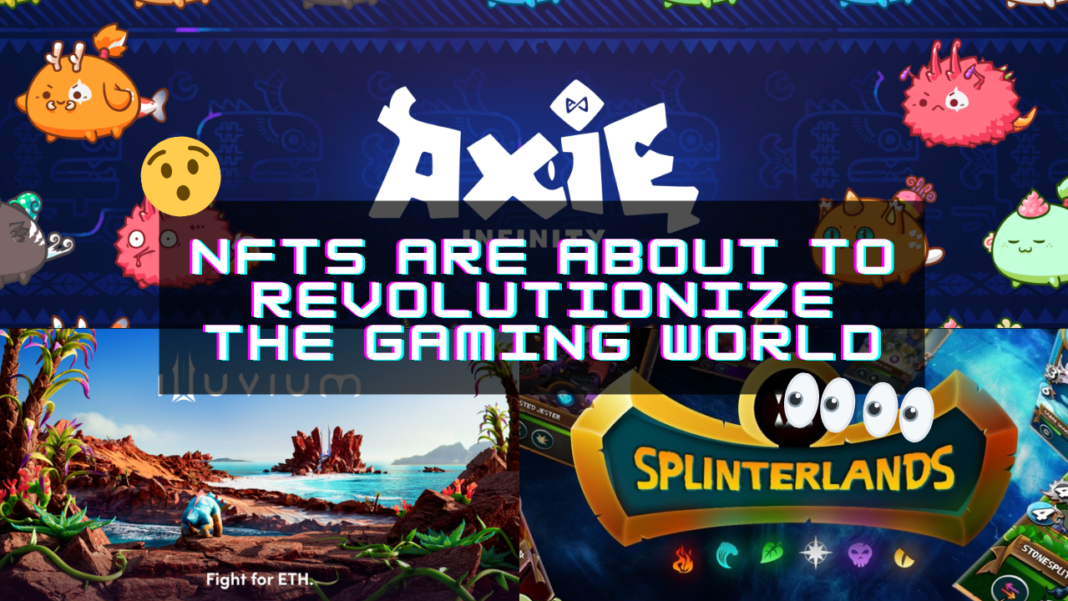 Non-Fungible Tokens (NFT) are one of the hottest new trends in the gaming world and rapidly rising in popularity for two main reasons. Firstly, this is due to the evolution of financial mechanisms in games. Secondly, users are revelling in the fact that they can earn through gaming, because what’s better than being able to make money while having fun, right?

Unlike traditional games which follow the concept of a ‘pay-to-win’ model, which involves paying to gain an edge over others, GameFi introduces a ‘play-to-earn’ model, which combines decentralized finance (DeFi) and NFTs with blockchain-based games. The idea revolves around giving players a monetary incentive to play and progress in the game and in some cases, also earn a full-time income while doing so. NFTs are stored on public blockchains, and utilising this technology in gaming provides numerous eye-catching benefits such as accrued items in-game not being able to be counterfeited, removed or destroyed. Game-native cryptocurrency transactions do not require intermediary settlements, clearings or custodies.

With that being said, here are 3 blockchain-based games that caught our eye:

In a span of just three years after its launch, Axie Infinity has established itself as one of the most popular GameFi projects in Vietnam, after reaching a whopping one million daily users for the first time in August. Created by Vietnamese developer Sky Mavis, Axie Infinity is an ethereum-based game akin to a Pokémon-inspired universe where users can buy, nurture, breed, and trade digital monsters known as Axies. They are the main characters in the game which are NFTs that can be sold or purchased. Axie Infinity runs off its own uniquely built sidechain, effectively optimizing gameplay and scale.

The native tokens, axie infinity (AXS) and smooth love potion (SLP) can be cashed out using MetaMask and Ronin Wallet by linking them to your account. Users can then log into Axie Infinity using Ronin Wallet, and claimable SLP can be transferred into it. By simply copying and pasting Ethereum wallet addresses as the recipient in the wallet section of MetaMask and selecting the amount of SLP to be transferred, withdrawals will then proceed after clicking “Confirm Through MetaMask”.

In this digital collectible card game, players build up their very own collection of cards with various abilities and statistics for the sole purpose of battling other players. Each card represents a NFT, and they are not only exchangeable but also tradable in the market. The gameplay relies on 1v1 fighting where players are randomly assigned battle parameters. Splinterlands utilises native tokens known as dark energy crystals (DEC) or splintershards (SPS), and also utilises a hive blockchain.

Crypto can be earned in Splinterlands through battles or from ranked battle winnings. There are three main exchange engines commonly used for withdrawals, which is Steem Engine, Hive Engine and Tron Trade. However, Steem Engine is the most commonly used and easiest engine to utilise. Players have to simply click on the drop down link and select Steem Engine Wallet before proceeding to check out. All that’s left would be to wait for approximately 5 minutes for the DEC to be transferred over to your wallet.

Illuvium, an open-world fantasy battle game, is another ethereum blockchain based game which has been in development since 2020. The game features creatures known as Illuvials, which players can capture and add into their personal collection. They are used in battles against other players in auto battle gameplays. The game features numerous revenue streams, which are mostly derived from in-game purchases, crafting components and shard curing. As part of the ILV buyback system, 100% of revenue is distributed back as rewards to those staking Illuvium (ILV) tokens.

ILV can be cashed out with the same exchange it was bought through by signing in to the exchange you have ILV on. If stored on a digital wallet instead, compare crypto exchanges to sell it on. After placing a sell order and choosing the amount of ILV to be sold, the transaction will then be completed after a final confirmation of the selling price and fees.

It might not be all roses when it comes to NFT gaming, but as with any financial decision, it is ultimately up to players to choose wisely when investing in these games. Take Illuvium for example, where the official liquidity pool with the best prices for ILV tokens is hosted on Sushiswap. Other exchanges also sell ILV tokens, but they are not officially sponsored, which might cause buyers to overpay for ILV. Value loss of digital assets can also be a real concern, so that’s another thing you might want to consider when dabbling with NFTs.

Match-fixing in esports Part II: It’s “quite simple” to match-fix – but is it...

Could the Philippines be SEA’s hottest new esports talent hub?