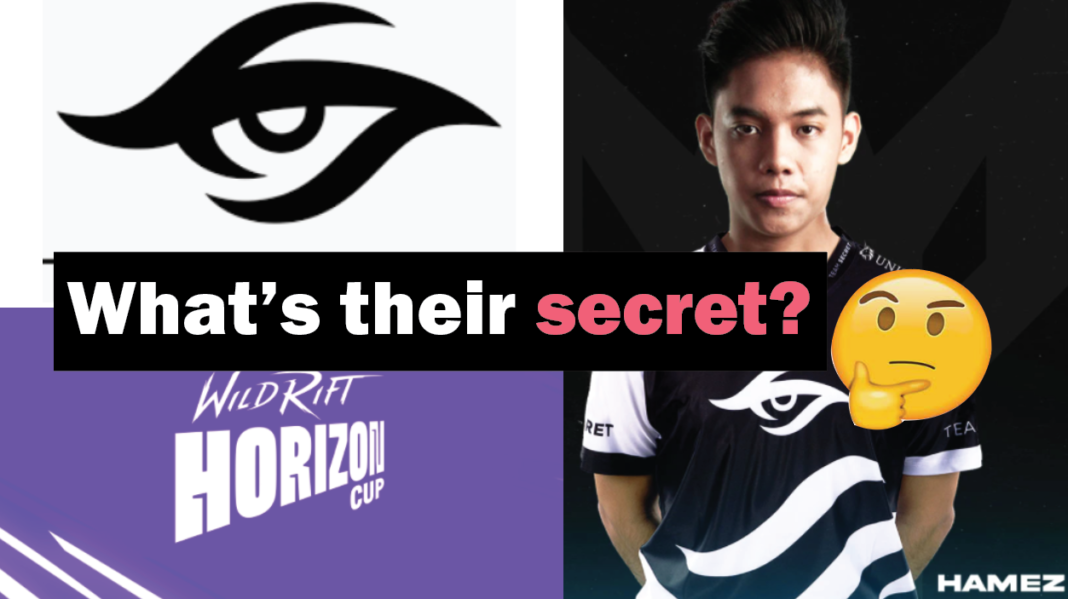 Team Secret (TS) came into the Wild Rift Horizon Cup as the 2nd seed from Southeast Asia’s SEA Championship. Yet, it was TS that ousted their demons of SBTC Esports in a convincing 3-0 series to obtain a Top 4 finish at the International Tournament.

Little do many know, this is the first time TS’s players have ever met each other in person. And this proved pivotal in their boost in power levels in the Horizon Cup.

“Before, we were far apart from each other and sometimes the comms were very bad. Now that we’re together we are able to talk properly and put together strategies to beat SBTC” said James “Hamez” Santos

And put together strategies they did, with Hamez playing a total of seven different champions as support throughout the tournament. Backed against a wall against Da Kun Gaming (DKG), Team Secret pulled off an unorthodox lane-swap strategy that saw Hamez playing solo in the Dragon Lane. This definitely caught DKG by surprise as TS commanded a gold lead for the very first time in the first 5 minutes of the game.

“We practiced this strategy a lot and we really wanted to sacrifice my lane so that we could punish the enemy top lane. It worked early game but we didn’t continue to punish harder.”

When asked about the META, Hamez had this to say with regards to their series against DKG.

However, this wasn’t too unexpected for Hamez despite Tatsurii’s bold claim of 3-0 the day before.

“Honestly, I knew it was going to be a tough match for us. Because we knew that they are a really strong team. But I at least wanted our team to perform better even if we lost.”

Looking forward, Hamez is optimistic that TS will perform better and become stronger.

“It’s still the first year and actually getting top 4 in the first International tournament for Team Secret. I’m already proud of the team. For next year we just have to work harder, strive harder and find support staff who will help us as well.”

For the fans, Hamez had a few words of gratitude, “I’m very thankful for you guys. You gave us a lot of energy and inspiration. Without you guys we wouldn’t have been able to come this far.”

Team Secret will return in the 2022 season of Wild Rift.