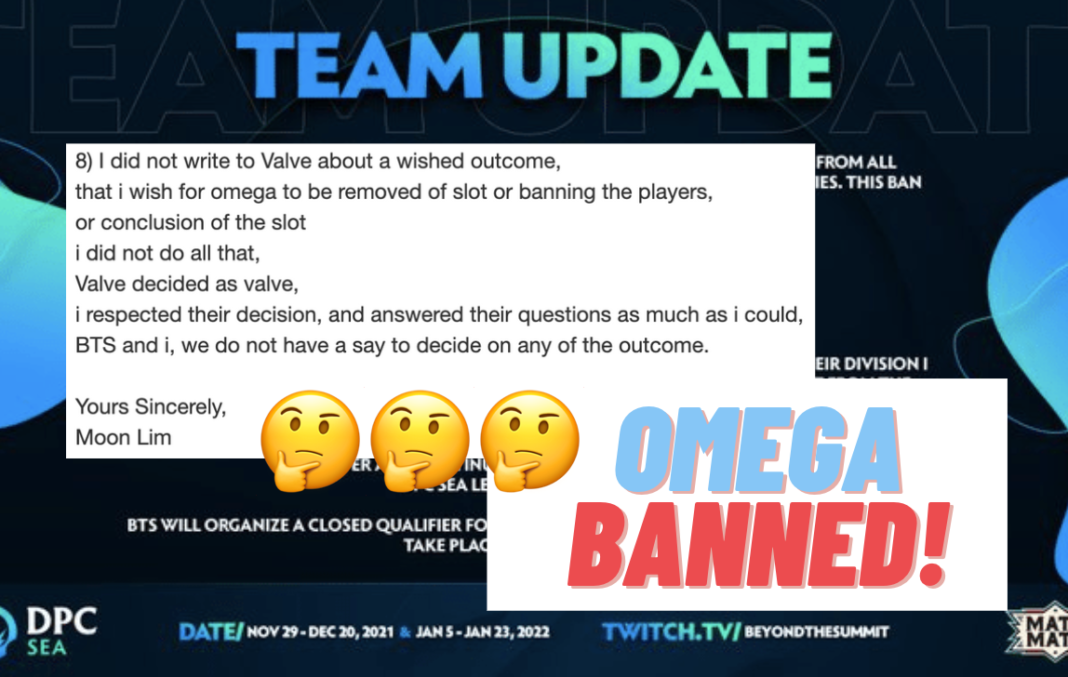 A whistleblower has come out to tell the story behind how Filipino esports organisation Omega Esports was banned by Valve for throwing the match against Mongolian team Lilgun.

Moon “Moon” Lim, a Dota 2 eSports tournament executive, shared a long post on Twitter detailing how she was the one who helped push Valve to ban Omega.

On 23 November 2021, tournament organiser Beyond the Summit officially announced Omega’s ban from all Valve-sponsored events because of match-fixing against Lilgun.

In her tweet, Moon notes that the match-fixing was brought to light when an integrity team — a group of officials who check that teams are abiding by the games’ rules — alerted her about a potential suspicious game on 8 September 2021.

Neither Omega nor Lilgun did so.

However, Moon was in Ukraine at the time, arranging another tournament. She was thus unable to start her investigation properly — relying on the match replays to find telltale signs of cheating, focusing on the moments, players’ movements and reaction times.

She noted that “It became really difficult also because Omega managed to draw some games, which was good because I encouraged CTY (Omega’s team captain) on those wins.”

Moon finally decided to send an email to Valve on 7 November 2021. She received a response on 16 November 2021, when Valve requested she provide more details about Omega’s attempt to cheat.

Before she knew it, Omega ESports’ coach Chris “CTY” Ian Francis Maldo, was calling to tell her that Valve had banned the team from participating in any more events.

While integrity has always been at the top of Moon’s priority list, she can’t help but feel a sense of regret to hear that the ban has affected three of Omega’s players: Ramzi “Ramz” Bayhaki, Lee “Forev” Sang-don, and Liew “Eren” Jun Jie, who were not involved in the scandal but lost their jobs because of the incident.

Moon ends off her tweet, saying, “i want to also encourage teams to come forward if they have anything troubling them such as matchfixing or they just wish to admit, and talk to someone,” hoping that all further regional tournaments will feature only clean matches.