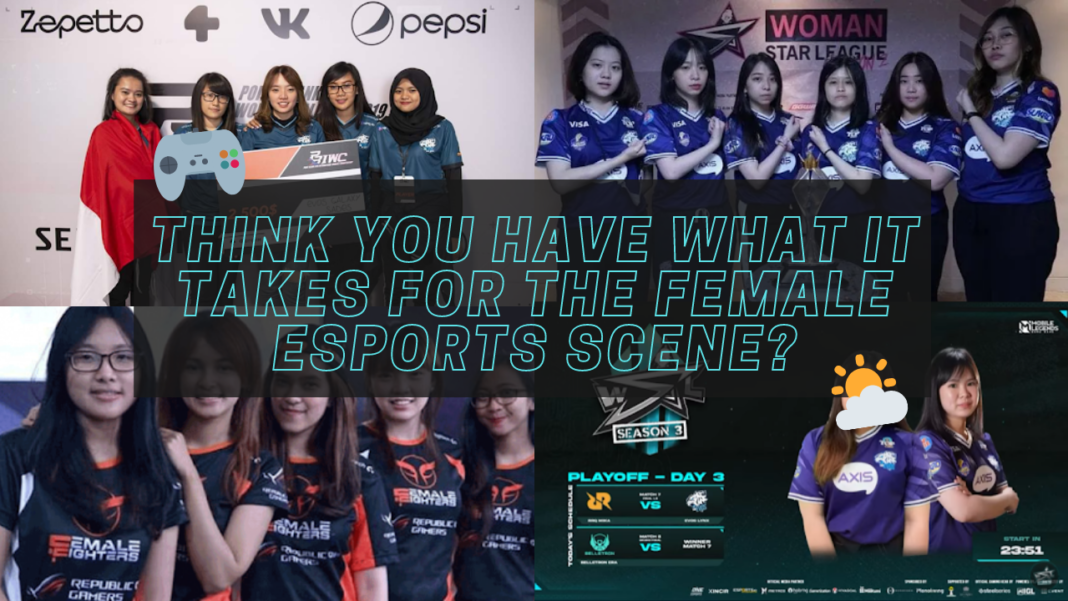 Let’s roll back to 2016, when esports is still considered mediocre in Indonesia. Esports didn’t have any recognition, many were against it (especially the parents), because it didn’t make you smarter, or even gain any money from it.

However, surprisingly in that year, many female esports teams were gaining attention not just because of their looks, but also their exceptional performance in the game.

Nixia, founder of NXA Ladies Gaming Team, formed the team not in 2016 or 2015, but in 2011! What’s appalling is that we probably didn’t even know what esports was back in 2011. The team started gaining a lot of attention and even won some championships.

Another team, Female Fighters, are also pioneers of the female esports scene in Indonesia. Founded 1 year earlier than NXA by Audrey, they garnered people’s attention by joining and winning CS:GO championships back in the day.

In 2016, there were a lot of female esports teams out there. NXA, Female Fighters, Revival Ladies, Cening Ayu Gaming. The scene was on the rise!

The Point Blank Ladies Championship (PBLC) held in 2018 was one of the biggest female competitions. Joining the tournament was EVOS (yes, that EVOS), which sported one of the strongest Point Blank female teams in the world!

EVOS’ Point Blank female team was unbeatable in three consecutive PBLCs and even went to Russia in 2019 to compete with the rest of the world.

After the PC gaming era comes the mobile games era. It goes without saying, Mobile Legends is the game to play. Winda ‘Earl’ was one of the early mobile legends players to play the game competitively. She even joined the men’s MPL team, BOOM ID, to compete.

Soon after the rise of the Mobile Legends scene in Indonesia in 2018, big teams were once again forming their female team, such as EVOS, RRQ, BTR, Alter Ego, ONIC.

Beautiful but deadly players surely deserve more attention. That proved in the recent Woman Star League, a tournament specially created for females. They reached more than 100k concurrent viewers and the video on Youtube amassed more than 1 million views!

The female esports scene in Indonesia is definitely growing and we hope the whole SEA region will follow.