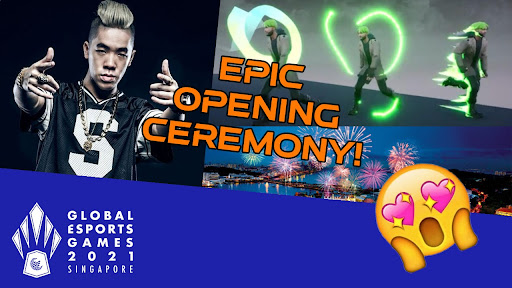 With the conclusion of Wild Rift’s Horizon Cup and Mobile Legends’ M3 World Championship, Singapore once again plays host to a world esports tournament; this time at the Resorts World Convention Centre in Sentosa.

The inaugural Global Esports Games (GEG) will provide a worldwide showcase for the world’s esports athletes and players. With over 100 players flying from 80 countries and territories to play in three flagship games; Dota 2, eFootball 2022 and Street Fighter V, the event already looks to be a blast. But what’s an international event without a kickass opening ceremony?

We spoke to Executive Producer Beatrice Chia-Richmond and shed light that the preparations for the Ceremony started over two months prior to the event. The entire event will be the result of a tight collaboration between Presplay (Creative Direction), CraveFX (Multimedia Production) and Anomalyst (Augmented Reality and Multimedia Production).

Rumour has it that there will be a metaverse performance, first of its kind in Singapore by ShiGGa Shay as he launches his new track. Yes, Singapore’s very own ShiGGa Shay. To top it all off, in true esports fashion, the hybrid opening ceremony will combine the real world with the aforementioned Augmented Reality, resulting in a truly Mixed Reality performance.

“It is a thrill to be able to work on an Opening Ceremony for a sporting event after 2 years of a pandemic, and in such uncertain times. The Organizing Committee has given us carte blanche to find the zeitgeist of the global community of Esports as well as the times. This gives us much creative expression to combine visual magic, music and technology.” said Beatrice.

Expect excellent graphics and projectiles to be flying all across the stage while he performs to excellent effect. The last time this occurred, we were treated to some serious True Damage performances. Here’s hoping this will top that.

Look forward to more AR technology employed as the Opening Ceremony continues. It will specifically be employed for the introduction of the GEF Flag as well as the Singapore National Anthem. But most importantly, it will be heavily utilized for the final portion of the ceremony.

The ceremony starts with a bang and will also kick off the games with a bang. Get your cameras and screenshot buttons ready. After the athletes are introduced and have taken their oath, the esteemed guest of honor will finally launch the tournament in true blue pyrotechnic fashion.

We’ve been told that the entry for the trophy is one to look out for.

From Zero to Hero: Production of the ONE Esports Singapore Major drastically improves