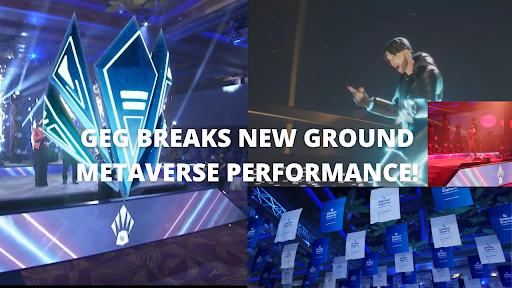 The Opening Ceremony of the Global Esports Games 2021 (GEG) just concluded and we are here to break down all the greatest moments during the ceremony.

The ceremony kicked off with a scintillating trailer highlighting the landmarks of Singapore with the added touch of the three flagship games that GEG would feature: Dota 2, Street Fighter V Championship Edition and eFootball 2022.

Competing at the highest level

The goal of the games was always to promote the power of esports and allow athletes across geographies to compete at the highest levels, said Ms Ng Shin Ein, the chairperson of GEG2021’s Organising Committee.

And just like any other sport, esports athletes go through much to get to the elite level.

“Most people focus on the fun part of esports. Overlooking that esports is also physically and mentally demanding,” she said.

President of the Global Esports Federation (GEF), Mr Chris Chan, also took to the stage to welcome our guests.

“Across the GEF’s first two years, we have seen unparalleled growth in esports around the world. And we have been proud to help unlock and shape the potential for athletes and gamers around the world to compete and shine at the pinnacle of esports,” he said.

“Despite our challenges and distance between us, we are indeed World Connected. The time is now for esports.”

The opening ceremony then started with a bang, led by rapper ShiGGa Shay, who transformed into a virtual avatar in the metaverse with the use of a motion capture suit.

His nifty dance moves and crisp rapping stole the show as thousands watched the performance in a virtual arena.

He also performed his new track “uTopia reimagined: chasing” – an electronic pop rap that had heads bobbing across the world.

With ShiGGa’s phygital crossover act setting the scene, the next segment of the event featured even more technology.

Using augmented reality, the GEF Flag was unveiled to re emphasise the power of such events to bring people together. It served as a perfect introduction to all the players who took the effort to fly into Singapore from across the globe to compete in one of the best international tournaments of 2021.

After all the athletes took their oath, Mr Edwin Tong, Singapore’s Minister for Culture, Community and Youth came down to grace the event and declare the start of the GEG.

With a quick press of the button, Mr Tong, who is also the Second Minister for Law, opened the event with a massive display of pyrotechnics, lighting the arena and igniting the excitement of the games ahead.

Excited yet? We sure are! Join us to catch all the esports action here.

From T1 to iceiceice, here are the major SEA-related Dota 2 changes!