ultiasia
Home Games I am Female. I AM also ESPORTS! 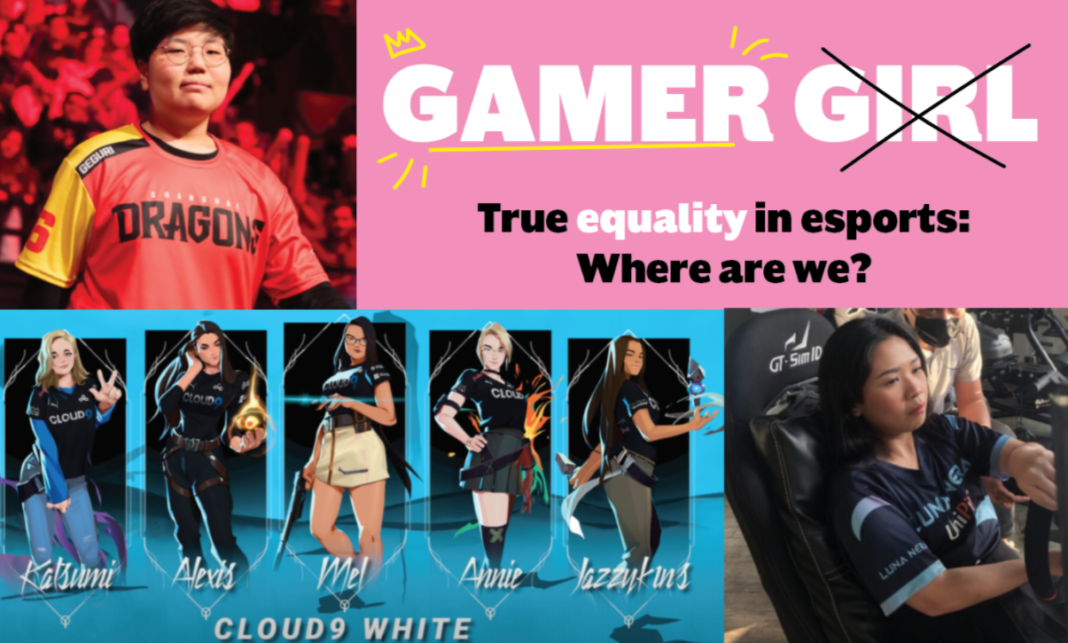 Firstly, yes, I am female. Yes, I have a masculine name. I love playing FPS games, especially team based ones like Overwatch and Valorant, which often require team communication in order to win. However, I rarely talk. Why?

Because I am female. Just look up videos talking about or showing the female gaming experience on YouTube and you’ll know exactly why. Rude remarks, people making a big fuss just because I sound like a girl and people blaming me for doing badly solely because of my gender and not because of my lack of skill. The list goes on.

In Valorant, I’ve experienced “praise” from teammates, the likes of, “Wow, this girl actually has brains,” and “How did she do that? She’s a girl!”

The sad part? I was actually proud and happy to receive those remarks. It felt like praise, like recognition. But what does it say when the few praises that female gamers get are microaggressions like being “not dumb” or “better than other girls, who are mostly bad?”

If this is something normal, everyday female gamers experience, then what is the situation in professional esports? How far are we to true equality in gaming?

A female gamer with mad skills? No way!

When Se-yeon “Geguri” Kim was signed to the Shanghai Dragons in 2018, becoming the first female Overwatch League (OWL) player, it was nothing short of inspiring. She was a top-tier tank player, known for her amazing tracking skills and high-level play on main, Zarya.

However, her journey to the top was filled with haters and doubters. During the 2016 Nexus Cup, she was accused of cheating by two players from an opponent team because she was so skilled that they thought she was aimbotting. Threats were hurled at her and she had to clear her name by playing during a livestream. Eventually, she was proven innocent.

While we can’t say if she was targeted solely because of her gender, we wonder, if Geguri were male, would this have happened? Or would her skill during the tournament be acknowledged instead?

Segregation does not equal fair opportunity

In December last year, ESL announced The Women’s CS:GO Circuit, a tournament exclusive to women. What ensued was a passionate rant by Duncan “Thorin” Shields, an esports journalist, who seemed to vehemently disagree with the tournament’s conception.

Ironically, his words and actions reinforce the need for a safe, accepting space for females to take part in professional esports, one that all-female leagues and tournaments like The Women’s CS:GO Circuit can offer.

However, all-female esports competitions have always rubbed me the wrong way. Yes, I acknowledge and know that these competitions can lead to female gamers getting the chance that they would otherwise not have to compete professionally, leading to better exposure, and I am all for it.

But why do females have to be designated to female-only leagues? Why can’t everyone, regardless of gender, compete at the same level, in the same tournaments? Female-only tournaments are being promoted as stepping stones for females to get into “big” esports competitions, but WHY are these stepping stones even needed in the first place?

If mixed tournaments were to become a reality, it should be done well and not be done for “wokeness” or pageantry. Take the Russian esports team, Vaevictis Esports, for example. They competed in the 2019 LOL Continental League (LCL) as an all-female team, not because the members were carefully and painstakingly scouted and selected based on their skill, but because they were merely last-minute replacements for an unwanted slot in the tournament. As such, they went on to do badly, perpetuating the notion that female gamers are bad, when in reality, the women were not bad players, they were just put in an unfair situation.

Esports for women shouldn’t be a thing. Esports is simply esports, unlike traditional sports, where men often have the physical advantage and thus gender segregation is needed.

So why are we still so far from that equal reality?

Why are there so few females in esports?

Stereotype threat is defined as the fear/anxiety of confirming a negative stereotype about one’s social group. When stereotyped groups experience it in evaluative situations, performance often suffers (Steele and Aronson, 1995.)

Stereotype threat can thus hinder females in pursuing an esports career, in fear that they would be affirming the stereotype that women are bad at gaming if they were to underperform in their esports career.

Another big factor in why women may be afraid to enter the esports scene? The fear of sexism and how they would be treated in a male-dominated industry.

“I think it is because women often don’t feel safe in the gaming industry. It’s a male-dominated industry and we feel out of place sometimes,” said Eliza “ELZ” Indriani, Indonesia’s first female professional sim racer and co-founder of Luna Nera Esports, an all-female team, when asked on why there are so few women in professional esports.

“I feel like some male gamers treat me differently, some of them are extremely nice for no reason, some of them are super flirty, while others are being toxic and underestimating me because I’m female,” she added. “Sometimes, people don’t believe that I am a “real female” and  have to ask several times just because I actually can play games in a competitive way.”

Hope for the future

While stereotypes and biases towards female gamers may never truly be broken, it is safe to say that times are, albeit slowly, changing. Though there is still a long way to go in true equality in esports, the creation of female leagues and the rare inclusion of females in major esports competitions like the OWL show that there is progress being made. With the phenomenon of streaming and esports teams such as Cloud9 emerging in the pop culture limelight, more female gamers and teams (such as Cloud9 White) are proving to the world that in gaming, gender is null and skill is what matters.

“I hope to see no boundaries between males and females in esports,” said ELZ. “We all compete as gamers, not as our genders.”

Can the Singapore Major shake off its troubles to deliver?