ultiasia
Home Games Listen up, Game Freak, here’s what we want (and don’t want) in... 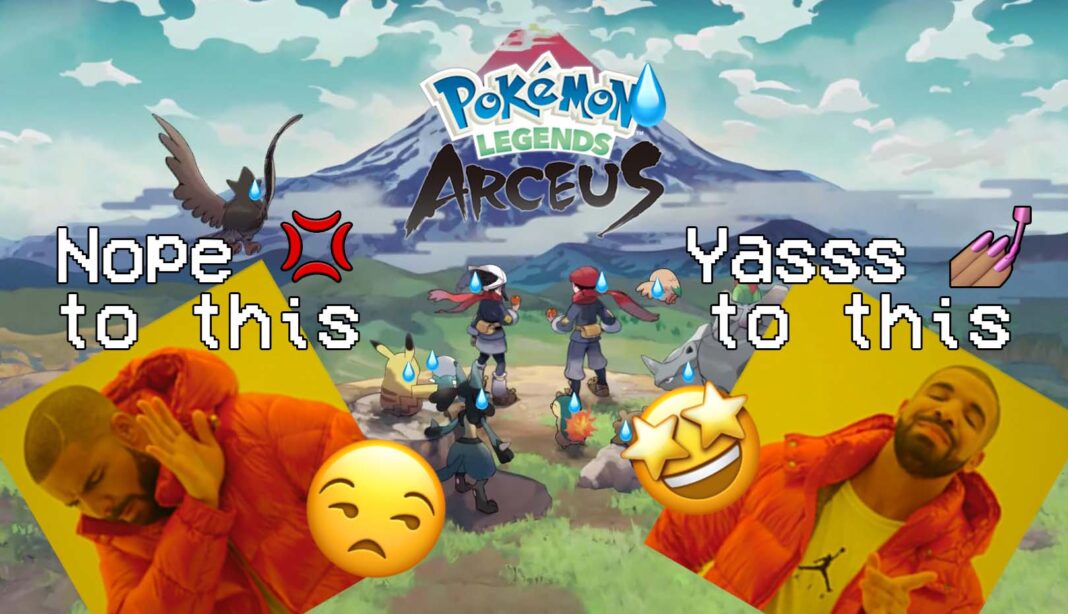 Less than a year ago, a Pokémon Presents unveiled a variety of upcoming projects. However, one of them clearly made the biggest splash: Pokemon Legends. It even overshadowed the highly anticipated Gen 4 remakes. The surprise reveal took the community by storm, spawning multiple discussions and fan theories.

After 25 years of Pokémon, a potential open world game, à la Breath of the Wild, wasn’t a pipe dream anymore. It was the new blood the franchise needed. Although many were rightfully excited, some remained skeptical.

Considering Pokémon’s recent record of games, there were questions of whether the developers can come through with Legends. In a few days, long-time fans will finally have their answer. But, it doesn’t diminish the strong hopes everyone has for the game.

Must Have: Spectacular Visuals

While Pokémon Legends had promise in the community, its first trailer didn’t sell it completely. The game looked like it was still in Beta, less than a year from its confirmed release date. There was a lack of polish—from the Pokémon to the environments.

When the infamous low FPS (frames per second) Chingling reared its head around, it was memed to death. For some, the cute bell Pokémon was a sign that Pokémon was stuck in its old ways. They were still willing to rush a game instead of putting in care into the amazing final product.

It was “lazy” animations all over again. However, careful eyes noted that this isn’t as true for Pokémon Legends. Reveals for regional forms and battle animations showcased smoother and lively Pokémon.

Some say Pokémon should have the same world as the recent New Pokémon Snap. But, if they manage to reach a quarter of what it accomplished, many fans will be satisfied.

Definite No: An Empty World

The new trailers temporarily soothed some fears but they’re far from a remedy. Others noted that, from an open world perspective, Pokémon Legends is a rushed game. From the jump, many touted Pokémon Legends as the franchise’s Breath of the Wild. If that’s to be the case, the developers need to dig much deeper.

With the groundbreaking Zelda game, it pushed the limits of what the Nintendo Switch was able to do. The vast world of Hyrule became a seemingly endless sandbox for fans to explore. Pokémon Legends’ Hisui region (former Sinnoh) has yet to prove that.

We want dungeons and caves, where we can enjoy getting lost in. We want to run along a pristine coast, chasing the setting sun before we’re mauled by an alpha . We want to discover hidden Pokémon in a forest and berate ourselves for not finding it faster.

The point of an open world game is exploration. So, whether it’s by accident or purposefully, give players something new and exciting to discover and remember.

Something fans seldom remember from Pokémon games is the story. Cue the stock evil team using the box legendaries to vaguely dominate/save the world. Then, the fate of the world somehow rests on a 10-year-old, who just received their starter yesterday. While Unova did this the best, we do hope for something new.

Basically, it’s time for a narrative revamp and Pokèmon Legend may likely deliver on this. As field research, players are tasked with creating Hisui’s first ever Pokédex in the olden days of Sinnoh. Through missions, plot, and aimless wandering, players have to catch and record every Pokémon in the region and uncover their secrets.

A Pokémon game that takes place pre-domestication of Pokémon? Take my money! But, while the historical setting and premise are intriguing, we need a story that’s worth investing in. Motivate us to chase that mythical Pokémon. Tell us an unforgettable legend, unique to this Pokémon world.

If capturing Pokémon is the sole objective, many will likely check out before finishing their first story run. Missions need to be varied and interesting. The rewards for doing said missions should be useful incentives. A little spice never hurt anyone.

Battling/Catching wild Pokémon and “bosses” should provide something different. No, we don’t mean a one-off battle gimmick. Unfortunately, the developers are sticking to their guns, with the Agile and Strong styles and turn-based battles remaining. Even though it’s fine, we hope they put some twist to this and make it satisfying.

Most importantly, please get rid of the tedious handholding. We understand the need for tutorials for newbies but they can be done in a way that isn’t insulting the players’ intelligence. It’s a delicate balance to strike. However, especially in an open world game, give us the opportunity to fail and learn the ways of Hisui.

In a Bullet Seed…

Whether it’s the bare minimum or a huge step, any glimmer of potential is welcomed. Ultimately, fans just want to play a great Pokémon game and have fun. Whether the developers can do that and simultaneously move the Pokémon forward is another discussion to be had. Hopefully, Pokémon Legends will be that crucial step forward for the franchise, instead of a “side step” spinoff like Pokémon Colosseum.

Fines, bans on Nexplay Evos and Smart Omega for throwing matches in Week 7...