ultiasia
Home Games What do you do when you unknowingly gain 10K subscribers? NCHProductions tells... 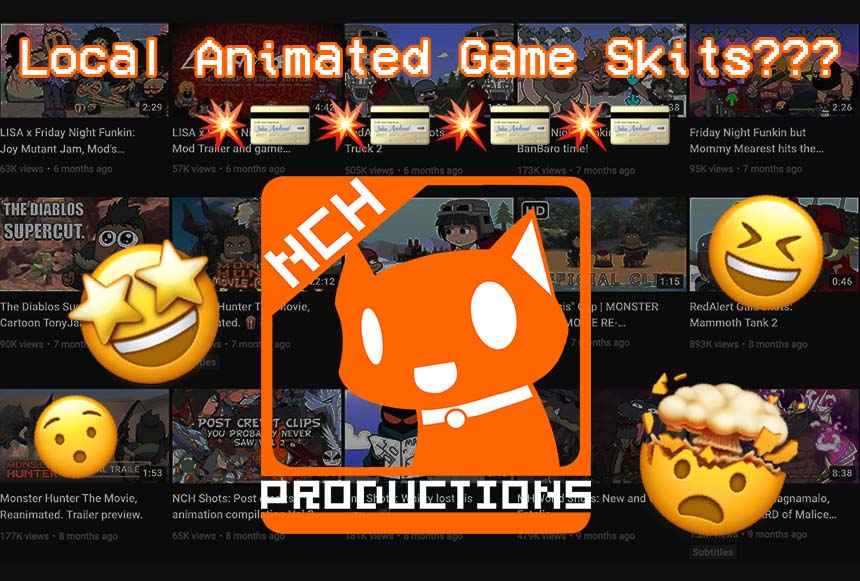 Animation is a demanding craft to pick. From ideation to colour, it takes multiple teams to complete a polished final product. Imagine having to do that entire process by yourself.

Meet the independent Flash animator behind the channel NCHProductions, Alex! His hilarious Monster Hunter and other game parodies have made him the very best like no one ever was. He stands out as part of a handful of YouTube animators in Singapore’s social media scene. And like many have dreamed of, he turned his passion into a career.

Although the Singaporean wouldn’t say he has perfected his animation skills, results don’t lie. Now, with 4 years of being a full-time YouTuber (and counting), his channel has amassed over 940K subscribers and 237 million views. However, success is rarely an overnight phenomenon.

The seeds were planted during his journey in the Institute of Technical Education (ITE), studying in Information Technology. As part of the course’s multimedia aspect, the 36-year-old was introduced to a myriad of Adobe software – one of them being the programme Macromedia Flash. Driven by interest, he started to learn more about Flash on his own.

But, sometimes the best way to learn is to dive right in. Through parodies, Alex practised by replicating things he enjoyed watching and was inspired by. He had a particular affinity for action-packed Japanese Flash animation.

From The Thing to Akira, he gets to pay homage to them while pushing beyond his limits. Soon after, he experimented with storytelling via his Monster Hunter skits.

He said: “I taught myself animation by referencing other people’s work… It took me many years of trial and error, practising and all that because back then, it’s really a hobby. So, I just do whatever I think I can do or try to pull off.”

Heading for Side Quests

While NCHProductions was created on YouTube in 2006, Alex didn’t take any stock of it. The channel only served as a vessel for his animations as other sites, like DeviantArt, didn’t allow video uploads. Little did he know that his videos would grow legs and go viral. As of January 12, his first upload – an animated music video for parody song We Live in Singapura – has racked up over 1.8 million views.

He shared: “I didn’t really regard its virality much. But I knew it was being played in schools all over because I kept seeing comments saying that they saw it during their assembly break or their teacher showed them the animation.”

Virality continued to pay Alex multiple visits afterwards, with his videos earning thousands of views. Despite this, he easily ignored his channel’s success, buried in other endeavours and jobs. Regardless, he unknowingly garnered 10,000 subscribers by 2011.

Eventually, a revelation finally struck upon Alex: There was something to this YouTube channel business. He picked up Adsense and learned how to run a channel. Inspired by fellow YouTube animator Carbot Animations and his Starcraft skits, he entertained the idea of making video game parodies. He decided on Monster Hunter as nobody else was doing it. Thus, carved out a nice niche for himself.

Through putting in the work and the hours, NCHProduction eventually grew to be profitable enough for Alex to take the leap. While he still takes on some freelancing gigs, he isn’t as reliant on them to make a living.

However, the payout from it was nothing to write home about. He shared: “My channel monthly income wasn’t sustainable at all. I only earned like $50 or less per month. So, that was when I was still working part-time, freelancing, and all that on the job.”

Every short video hides days of effort. To save his time and sanity, Alex skips the pesky pre-production and storyboard stage. He’ll dive straight into a project the moment an idea settles in. Fortunately, after setting up a Patreon, he gained a budget. The whole process was then streamlined as extra help was hired. He has even collaborated with smaller YouTubers, like Malaysian channel Direct and Dominate.

But, like many YouTubers, he faces a common problem – the infamous algorithm. YouTube seems to actively antagonise its creators with how disgruntling it is. The chance a video is recommended or gets buried is a shot in the dark.

He shares: “I paid this guy to help me do this side series but it never did well until I compiled all five episodes into one long 19-minute episode. Suddenly, it got a million views. It just tells me that regardless of how well you do your animation, it all comes down to YouTube’s so-called algorithm. If it decides to choose to broadcast your animation out then you struck the lottery. To me, it’s like you’re playing a gambling game.”

“For my case, because I keep changing the style, topics, and genre and character designs and do other stuff that’s not Monster Hunter, it’s more slow-growing… I never really like to pigeonhole myself into a certain art style and genre in my work either.”

Worry becomes a persistent, nagging feeling. YouTubers, especially smaller ones, are on constant alert for any changes to the system. Whether it’s the algorithm, company policy changes, or copyright claims, everything has a dire impact if you’re not one of the biggest creators on the platform.

For Alex, a tax policy that puts a 30 per cent tax on ad revenue from US viewership dealt a devastating blow. Videos that can’t catch fire or views aren’t easy to shrug off anymore.

“Now with the taxation, I cannot tank these ‘flops’. I just have to change up and do more short-form animation instead of burning all my time into a long one,” he said. “Every new year I enter is a very uncertain year because I’m always worried that my channel will start to not perform well and I may have to start working on something else.”

Levelling up in the Post-game

His ultimate goal is to someday create original content. While creating parodies is still fun, Alex is all too familiar with the grey area he’s treading. Under the shadows of intellectual property (IP), YouTube could demonetise any video if companies wanted. But, with his own IP, Alex would be free to create videos and merchandise of it.

“At the moment, I still don’t think I can put it out because original content is something very hard to come up with… I’m still not sure if I can do anything about that for 2022 but who knows… But I think these days, I’m trying out more original animations that don’t tie in with something that I don’t own,” said Alex.

Regardless, Alex’s passion will carry him through everything. Nobody can deny that with over 200 videos to his name. He’s proof that one’s interests can become bigger than hobbies if we wanted them to. May 2022 bring fortune to content creators, like Alex, and more local animators will crop up in spite of YouTube’s hostile terrain.