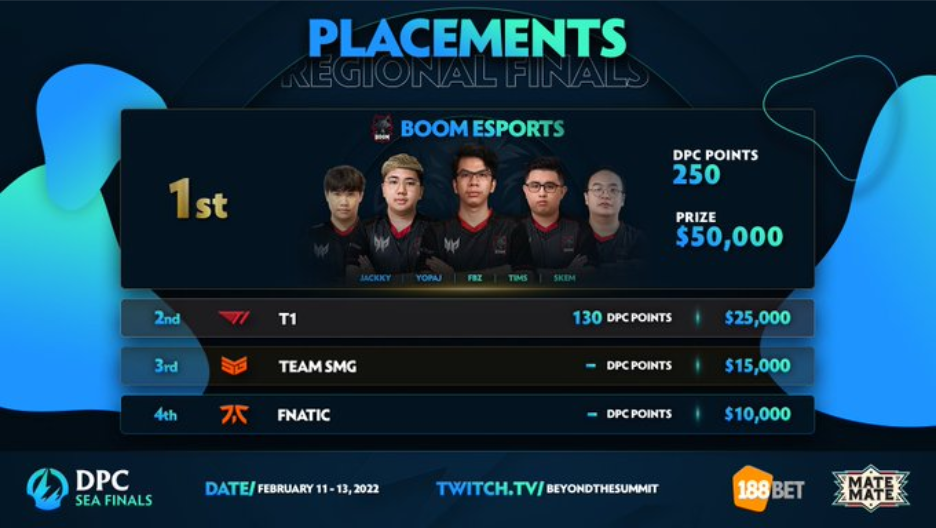 The match was touted as a clash between titans, a battle royale between the top dogs and bloody brawl between two gladiators.

But when the clash happened between Boom Esports and T1, the region’s top teams, the game turned out to be a one-sided affair.

Boom beat T1 3-1 to claim the first Dota 2 regional championships, a makeshift event after the first Major of the game’s Winter Season was cancelled. The team, based out of Indonesia but featuring four Filipino players, took home US$50,000 and 250 DPC points for taking out T1.

T1, which had a superb run in the last The International, has had a mediocre run in the first tour of the DPC. They finished third behind Boom and Fnatic, a season that many of its fans had expected the team led by Carlo “Kuku” Palad to dominate.

And they seemed to regain their form in the regional finals, beating out Fnatic and then Boom in the Upper Bracket. Their improved performances in the one-off tournament was also down to a new carry Kim “Gabbi” Villafuerte Santos, who stood in for Nuengnara “23Savage” Teeramahanon.

But even though they beat Boom 2-1 in the Upper Brackets, they were felled by a superior Boom team, led by their midlaner Erin “Yopaj” Jasper Ferrer, who had an outstanding series with the team.

T1 also faced Internet issues that forced them to swap out their usual midlaner “Karl” Baldovino in the fourth game. That prompted T1’s team manager to declare that the entire T1 roster will move to the Philippines to avoid the repeat of the fiasco.

Still Boom showed that with smart drafts and good teamwork, even the biggest giants can be felled. Congratulations to the newest champ of the region!