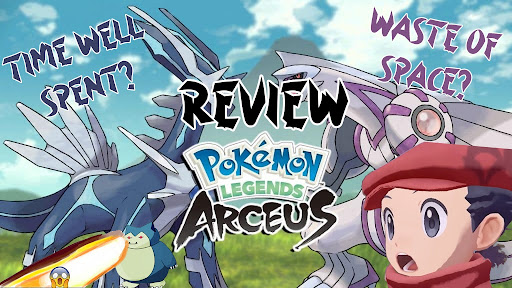 We were all hopeful, even made a wishlist of sorts. But did GameFreak reinvent the wheel or did Pokémon Legends: Arceus fall flat?

After a disappointing release of Brilliant Diamond and Shining Pearl (BDSP), in came Pokémon Legends: Arceus to properly represent the Sinnoh region; albeit a few hundred years into the past.

Time to truly catch them all

And reinvent the wheel they did. It has been a long while since GameFreak and The Pokémon Company made any effort to diverge from the tried-and-true formula to inject more life into the world of Pokémon.

Being a hardcore Pokédex completionist, it was easy for me to fall in love with the new mechanic of Research Tasks. Frankly I hit 6-stars even before I entered my fourth map. Though it is highly understandable that some might find that the Pokédex rating a chore to deal with since it also gates players from progressing the story.

What was lacking in freedom in BDSP was given in spades in Arceus. You pick when you want to battle and when you want to run. Want to play it the Pokémon GO style? You can, if you’re stealthy enough. Should you decide to go into the wild guns blazing, just make sure you’re properly stocked on potions. The game offers us enough of a challenge for us to consider both options while exploring the region.

The presence of Pokémon Alphas really ensures players don’t throw caution to the wind. One wrong step and you might get a Hyper Beam to the face. While I took much effort to not black out at any point in time traversing the world. Many others weren’t so careful.

I will admit though, that some of the later boss battles had me hitting the retry button once or twice especially since it utilizes a new battle mechanic that involves the player more than their Pokémon. This too, was a very welcome change.

The new battle mechanics are a definite plus. For prolonged battles, the Strong and Agile styles make all the difference in the world. I only wish they wouldn’t take twice the PP to use.

As for several other mechanical changes like Drowsy and how status effects overwrite one another, these serve to ensure a more realistic battle system.

Unfortunately, many moves that existed from previous generations are noticeably absent in Arceus. While it’s easily explained away as “not invented yet” by many. It’s clear that some moves that worked in a separate battle screen would not work as well in an open-world setting.

From start to finish, the threat looks over you like a Space-Time Rift in the sky. Up until the credits rolled, nothing else tossed a wrench in the works. Although I like how the game managed to incorporate some slight new furnishings for Jubilife Village as the story progressed, that was pretty much the full brunt of it.

The lack of voice-acting and the writing that beats morals into the back of your head was anything but desirable. While this may be so for the majority of the Pokémon franchise, I would have expected at the very least half the writing the Black/White games had to offer.

Expect the next Legends game to be on another console

It goes without saying, the elephant in the room are the graphics. While Breath of the Wild managed to pull off the Open World concept with minimal graphical issues, Arceus’ graphics are… bland. It seems to us that more work had to be put into animating 3D-models of the multitudes of Pokémon available and none was left to polish up the rest of the elements in the world.

Biomes are rarely distinguishable from one another. The water is poorly animated and lava felt so stiff it took me out of the immersion for quite a bit. Not to mention the random glitching and clipping textures that happen every now and then.

Perhaps the Nintendo Switch can only do so much and we’ll have to wait for a new system that will be able to support what the ideal Legends game should be.

Pokémon Legends: Arceus takes several strides in the right direction but fails to deliver the complete package to justify its price tag. The cool easter eggs and cameos are a blast to discover but are sprinkled a little too sparingly in the stiff and mundane storyline.

While many complain about an empty world with not much to do, I’d say this is plenty for a first game of its kind.

Pokémon Legends: Arceus gets a passing grade of 6.5/10.

Here’s to looking forward to a better Legends game in the near future.