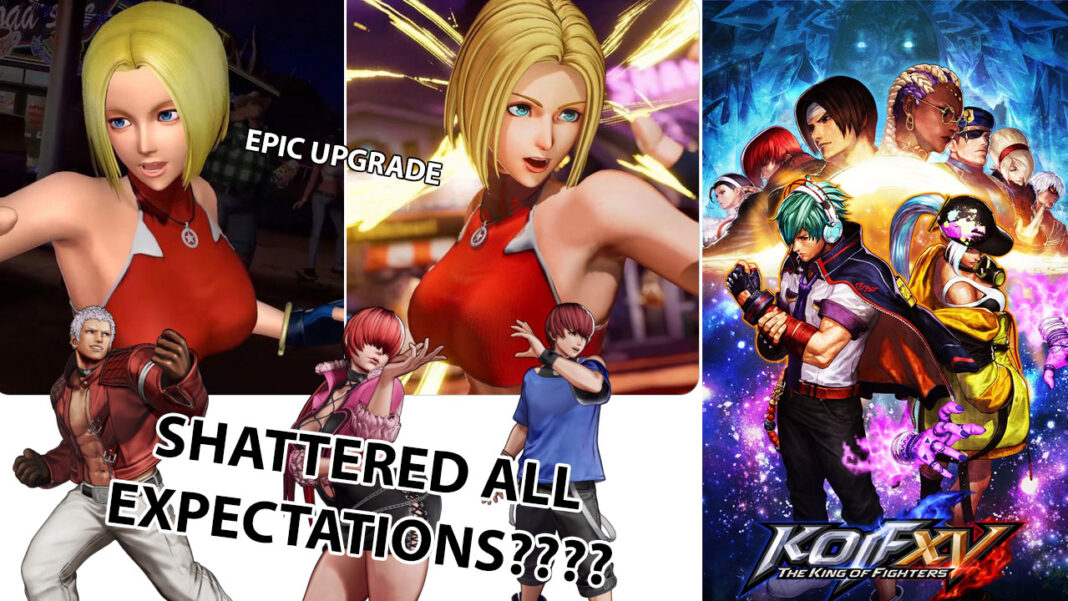 Ah yes, the neglected child of the fighting game genre has created yet another fighting game. Ever since the massive failure of KOF XIV and the waning popularity of XIII, one would have assumed that developer SNK would just throw in the towel and focus on Samurai Showdown instead.

Instead, they doubled down on the 3D modelling of KOF XIV and decided to give it a fresh and expensive new coat of paint.

If we recall, the first semblances of KOF XIV trailers were all but pleasing to look at. Even if they were boasting 50 characters, several of them were never-seen-before awkward additions.

This time, SNK made sure to put quality over quantity. Offering only 39 characters but all of them absolute bangers. Borrowing from the plot device provided by XIV, they revived evergreen favourites like Yashiro, Shermie and Chris and many others thought long retired from previous storylines.

Graphical upgrade, easier combo execution and top it off with great voice acting in and out of story mode? Sign me up. SNK definitely listened to a lot of fan criticisms since XIV. Allowing for EX moves to be used outside of Max Mode was a huge plus. But that’s not all; they also improved how Max Mode worked and even included the new mechanic of Shatter Strike.

Needless to say, the biggest asset and upgrade from XIV is definitely the online net code. What arguably killed XIV immediately after launch was the fact that nobody could play decent ranked games online. So the fact that online play is seamless and exceedingly smooth despite a 200ms latency says a lot about how much time SNK put into ensuring this worked.

Unfortunately, online play still doesn’t support cross play. This means players on PC can’t play against Playstation or Xbox players. This results in exceedingly long queue times or small player bases for the PC crowd.  After all, the sad state of affairs is that fighting games are more popular on consoles than on PCs.

In addition, the Menu UI for the game, while clean, is not intuitive, resulting in confused players wondering why they are playing pre-set teams and are unable to change them during ranked games.

There have also been some complaints for keyboard users unable to bind certain keys to play the game their way.  But these are minor issues, not so much that it breaks the game whatsoever.

The price tag: US$60 for the main game and US$85 for a deluxe version seems a little overkill and makes the game highly inaccessible to newcomers. For a game that is trying to regain popularity, this ain’t it folks. For context, even Final Fantasy VII: Remake was priced at US$70 and one can tell which game deserves which price tag.

In any case, the good definitely outweighs the bad in KOF XV. As with any fighting game, it’s a difficult game to master and one cannot expect to get good without taking a few Ls during ranked games. Temper your expectations instead of shattering them and keep at it.