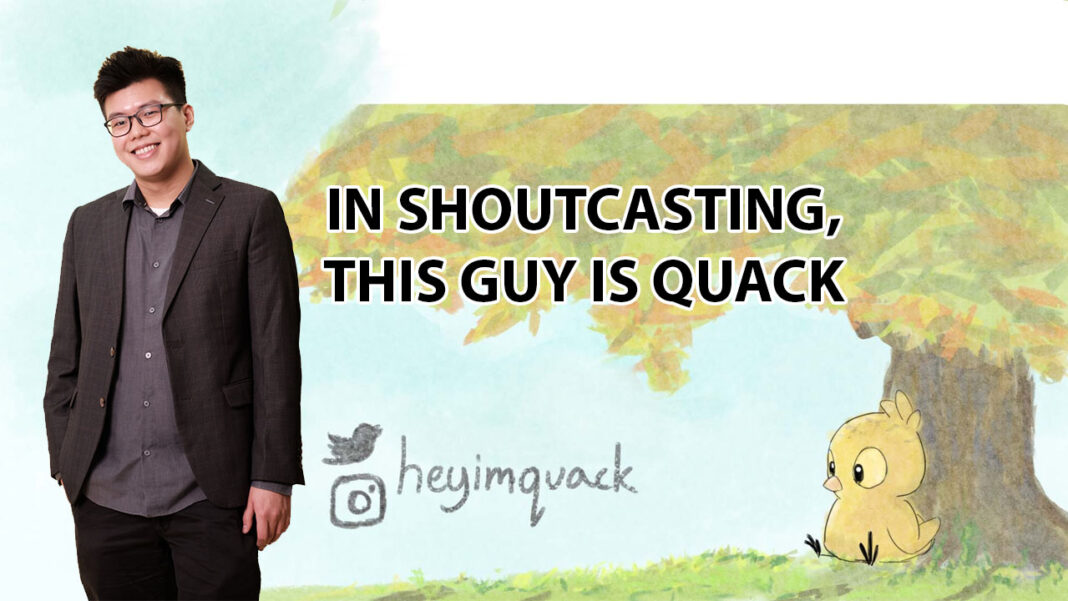 Fresh out of National Service, Kentrell “Quack” Kwek is moving swiftly in his career of choice: Casting in Esports. Just over a year back, Quack showed up to cast the finals of VALORANT tournament “TheGym Singapore Invitational” (GSI). Now, he is showing up to cast in the VALORANT Champions Tour 2022. It is a surreal leap and Quack himself does not seem to believe it.

“Honestly, I just feel ridiculously fortunate. I’m really privileged to be able to do any of this, and whether it was luck or happenstance, I wouldn’t be where I am if not for help from guys like Daryl, Grandon, Marquis, Leonard and Wei Hao.”

But just who is the man behind the “Quack”? Why the name “Quack”?

“I wish I had a cooler story for this, but (there is) no inspiration whatsoever. *laughs* It’s my last name, Kwek! That and my mom collects ducky soft toys. Also, ducks are cute.”

It is evident that behind the voice lies a fun-loving, easy-going person. So easy-going that he wasn’t even aware of the esports scene in Singapore until he joined a casting workshop with SCAPE.

“It was pretty much a magic carpet ride that opened my eyes to this whole new world, and it was there that I met my mentors Grandon “Gamernissem” Oh and Daryl “HungryCasts” Lim. Shortly after, Daryl recommended me to his esports talent agency, Loudmouths, and I have been casting ever since.”

In fact, Quack was eager to share with us a few clips of him in the workshop trying out the craft.

And what a journey it has been. Looking back at Quack’s career, he started off looking for gigs on his own; going to the extent of messaging community tournament organizers to see if there were vacancies.

“I was new and wanted more opportunities to cast VALORANT, which recently launched at the time. I didn’t want to be a sitting duck (HARHAR), and sent cold emails to any local org/production that was hosting tournaments in hopes that they’d let me cast. With a bit of luck and some rejection here and there, a few were open to having me cast for them, and I’m grateful for that.”

Eventually these opportunities gave rise to even more opportunities for Quack. Up until he was casting in the GSI. His trick to getting recognized as a caster? In the wise words of Master Yoda, “Do or do not, there is no try.”

“Honestly, I wouldn’t recommend stressing too much on getting recognized. One of the best pieces of advice I got really early on from Daryl was to keep my head down, focus more on developing solid fundamentals, casting well, improving and getting better. You’ll naturally and eventually get recognized when you do a good job.”

And do a good job he did. Quack focuses a lot of his craft in preparation.

“I am someone who tends to get in my own head, getting anxious before going live and such, so preparation is something that’s of utmost importance to me.”

Quack homes in on a myriad of things to prepare for; the game, current meta, players and teams’ history and play styles and even how he dresses. He stresses, however, that the most important part of preparations is SLEEP. Which makes a lot of sense since you don’t want to be caught dozing off during a broadcast.

“On a more fun note, my personal pre-cast ritual involves listening to Eminem/some kinda rock/metal music depending on what I feel like to pump myself up (been listening to “The Rumbling” from AoT’s opening, and “The Only Thing They Fear Is You” from Doom Eternal OST)”

A bright future ahead

Quack is still in his early years of his career and he shared with us his personal aspirations for the future.

“(The) practical answer would be to make a full-time career in esports or casting a possible and sustainable thing. Quite frankly, I don’t think I’m there yet.

And while a shot at casting bigger ticket events would be huge, I really just want to be a good caster/person. The kind of caster that captures that sort of, heart-in-your-mouth, impactful play, and really brings that joy and energy to everyone watching it. All for that one moment.”

We concluded our interview with Quack asking him for shoutouts. He did not hesitate to mention Kimberlyn from SelectStart, the organization handling the Female Esports League (FSL).

“She’s one of the most professional and efficient people I’ve ever worked with. The FSL VALORANT Circuit (now VCT Game Changers APAC) is her baby, her commitment to empowering and elevating women in the scene is inspiring, her team’s fantastic, and she was one of the first few people who gave me an opportunity to cast. I’d like to think that FSL VALORANT has grown, and I grew along with it, haha!”