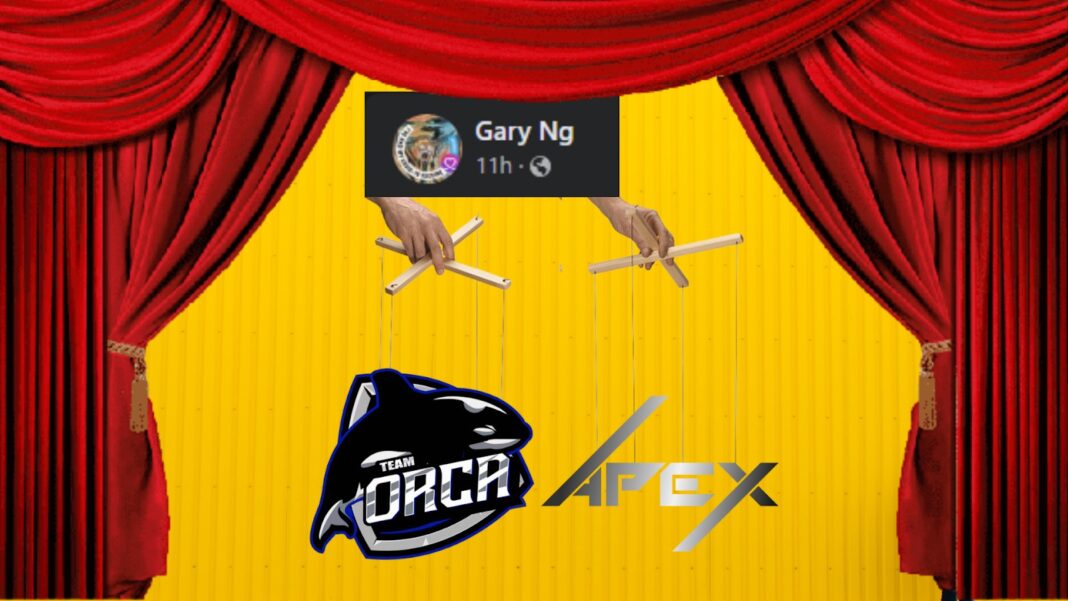 The man behind the latest esports scandal has admitted that he coerced Team Orca players to play for Team Apex. In an extensive apology post, Gary Ng, manager of Team Orca, detailed his role in the despicable cheating that took place under his care.

To the shock of everyone, Gary revealed that besides being Team Orca’s manager, he was also “the boss of Apex”. This would explain how he could get both teams involved in his account-sharing sham.

With a remorseful tone, the faceless culprit explained how it all began. Apparently, Team Apex had begun falling apart soon after its formation, with players hunghung and Yasy engaged in an unresolvable dispute. Before he knew it, two players had abandoned his team, leaving them scurrying for replacements.

To make matters worse, the DPC open qualifiers were just days away. Unable to find a satisfactory stand-in, Gary began to despair. He was “not willing to see the investment money which is all my savings go down the drain”.

Blinded, in his own words, by greed and ambition, Gary forced the Apex players to surrender their accounts by threatening to withhold their allowances. In addition, he deviously crafted a lie that they were using a VPN to throw off anyone who suspected them.

This jaw-dropping revelation comes days after Team Orca player, vtFaded, admitted that some of his team’s players had been involved in account sharing. However, he was adamant that allegations of match fixing were simply untrue.

Gary was in agreement with him, saying, “…I can assure you that both team(s) did not participate in any matchfixing. They feel sad and down for every blows and losses they took.”

Although both player and manager have denied these accusations, Beyond The Summit, the organisation that oversaw these investigations, has yet to comment.

In a show of regret and introspection, Gary sought to shift the blame away from his players onto himself in the final words of his statement.

“Please do not punish them for my own greed, give them a chance to redeem themselves.

Those kids are still young.

I apologized sincerely here and I begged for a second chance for them.”

It remains to be seen what will happen to the Team Orca and Apex players, who have already been permanently banned from participating in any Valve tournaments. More importantly, the esports world waits with bated breath to see what sort of punishment will be given to Gary befitting of his gross mishandling of trust.

The insidious intention and deceitful devising of Gary Ng is clear for all to see. Well, at least he said sorry.

Game Awards who? Welcome to the Ulti Awards for the Best MOBAs of 2021!

What do you do when you unknowingly gain 10K subscribers? NCHProductions tells us what...

The 7 most epic moments of Jeff Kaplan from Overwatch