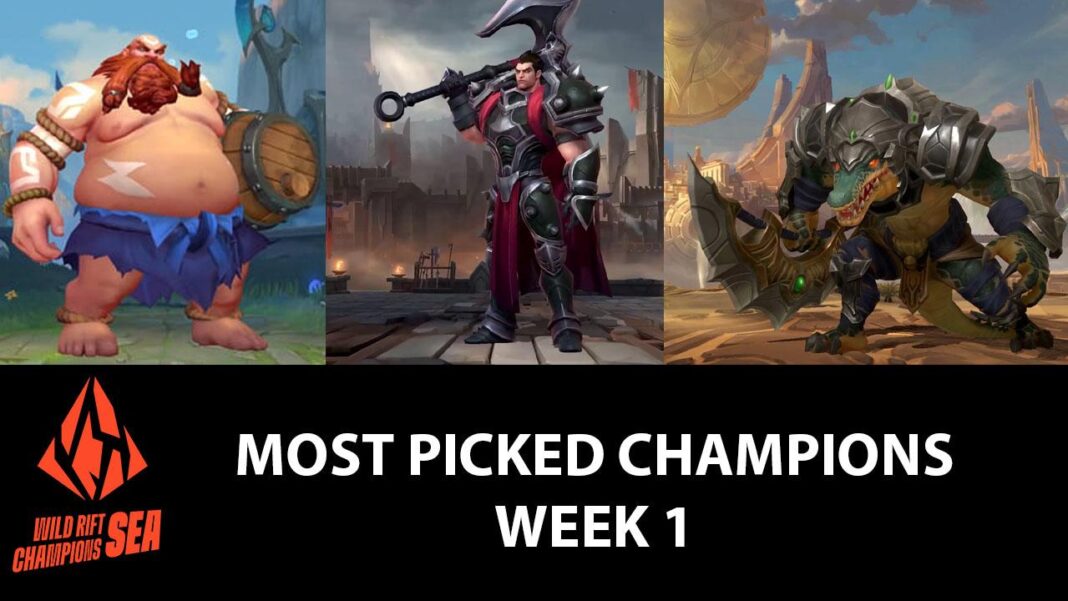 The first week of the Wild Rift Champions SEA (WCS) has come and gone. We understand that it is hard to keep track of all of the action since attention needs to be split across multiple countries. Fret not, we’re here to break it all down.

It would be callous to call out power rankings of teams just after a week of play, so this week, we’re focusing on Champion picks.

We don’t mean to get pushy but Gragas seems to be the man of the happy hour in Wild Rift right now. He was picked a total of 62 times over the weekend across all countries. With large amounts of sustain while also being able to make great plays displacing the enemy formations, it comes as no surprise that our favourite beer belly is seeing so much play in the rift.

His win rate of 42%, however, leaves much to be desired. It does seem like while he is versatile, it takes a certain amount of teamwork for him to exert his full potential.

The other regular pick has to be none other than our resident croc: Renekton, taking either the Top Lane or the Mid Lane. Picked 51 times and sporting a 59% Win rate, it was a surprise to us that the SG/MY region only picked him twice and failing wholly on him too.

We still don’t know if SG/MY have Renekton’s number or that SG/MY just don’t like playing him, but from this we can start to see some differences in meta forming in SEA.

Your Blood is my Health: Darius

We’re starting to see a trend here. Flex picks are important in the current Wild Rift meta and Darius is no exception. Equipped with damage-galore while also having the additional healing utility from his Decimate, we have seen Darius turn teamfights into bloodbaths pretty quickly.

And if we’ve learned anything about League of Legends, it’s that cooldown resets are absolutely unstoppable.

And that’s it for this week’s WCS Roundup. WCS continues 4 March 2022.

The champions of the inaugural Global Esports Games prove that esports is truly a...

NFTs are cool. But keep them away from gaming