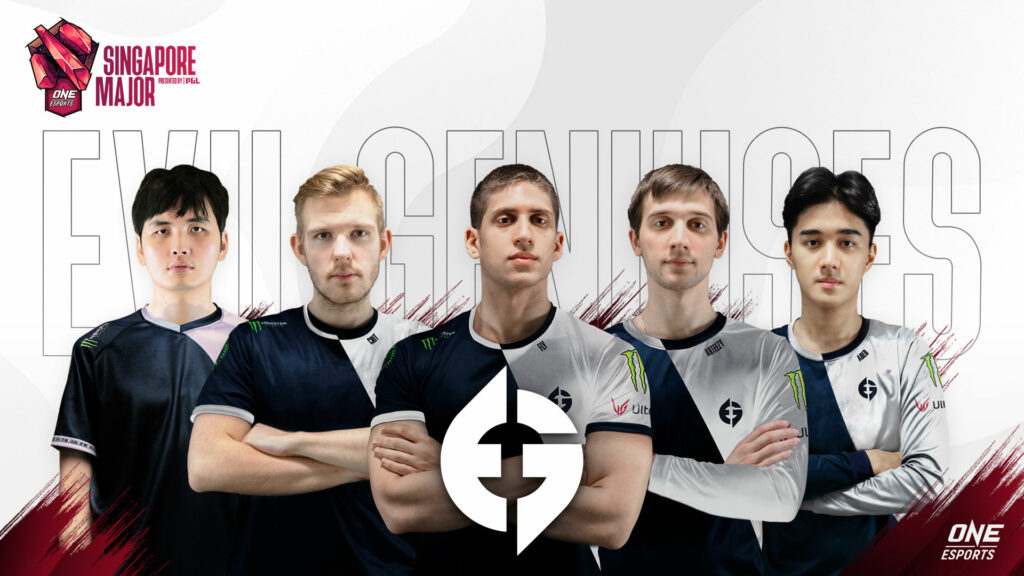 Fans of Evil Geniuses and Team Secret will be in contrasting moods after the penultimate day of action at the ONE Esports Singapore Major.

The Team Secret fandom will be nursing their shattered hearts after a humbling 0-2 loss to China’s Invictus Gaming (IG) sent their team packing. But on the other hand, Evil Geniuses fans will feel fairly confident of their team’s chances to clinch the top prize.

Evil Geniuses, the only unbeaten team left in the tournament, are just one win away from being champions. They will face the winners of an all-China Lower Bracket Final between IG and PSG.LGD.

Evil Geniuses will have the psychological advantage, having already beaten IG 2-0 in the Upper Bracket Round 2 and just edging out PSG.LGD 2-1 in Saturday’s Upper Bracket Final.

In the tie-breaker, the North American giants found that little bit of extra to push through. With Abed going wild and Daryl “iceiceice” Koh holding down the lanes, EG were ready for Wang “Ame” Chunyu’s Monkey King – one of the main catalysts for PSG.LGD’s win against Team Secret in the Upper Bracket Round 2. Eventually, they displayed championship-winning quality to snatch victory.

But even as the attention now shifts to remaining contenders, it worthwhile to pay tribute to the efforts of two teams who thrilled fans – only to just fall short.

On a better day, OB. Neon, could have beaten Team Secret in their Lower Bracket Round 3 match. The Philippines side’s midlaner Erin Jasper “Yopaj” Ferrer was on fire, making godly plays and keeping them competitive right till the end. He will have no shortage of suitors now.

Southeast Asian supporters would have shed tears of joy watching OB.Neon’s fairytale run this Major. The team definitely showed its class and we are already looking forward to seeing them conquer future Dota 2 competitions.

Meanwhile, Thunder Predator can be proud of themselves for a top 6 finish despite falling to IG. They may have lost to two top seeds in this tournament, but their dominance in the earlier rounds would have earned them some new fans. We’ll be keeping an eye out on them for sure.