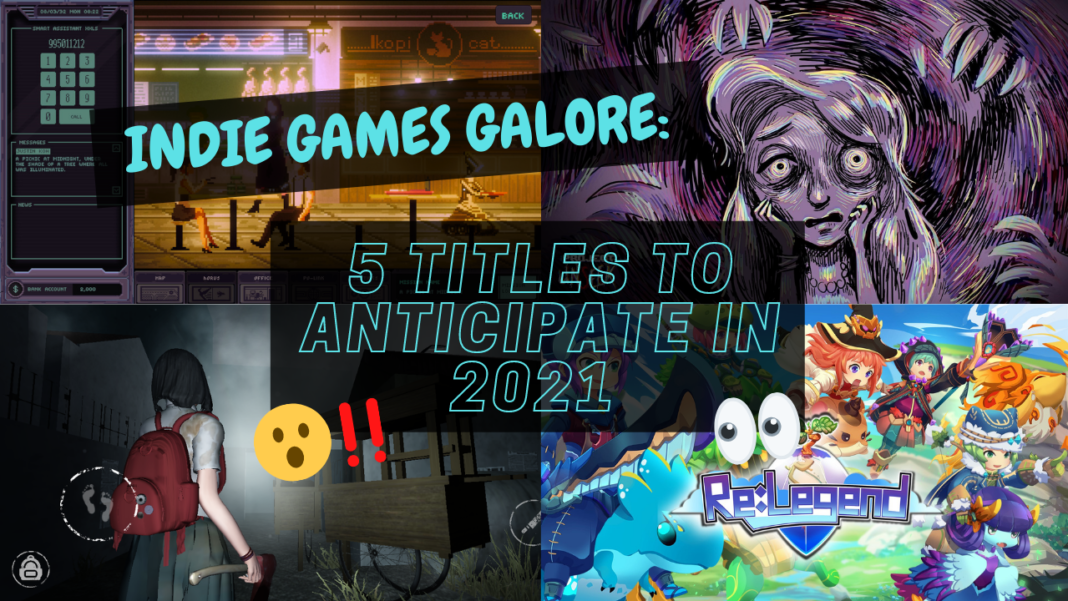 Whether you’re looking for old-school titles, or something fresh and invigorating, indie games have got you covered. With a diverse range of titles stretching across all genres, you can be sure to count on indie games to give you a fresh dose of inspiration in gaming.

Gamescom 2021, the largest game exhibition in Germany, features the presence of Southeast Asian game developers and the upcoming games they have been working on – all soon to be ready for gamers to play.

No doubt, the indie game industry has been booming all on its own, but here are some titles we feel deserve more traction:

Calling all fans of horror-themed games, for this Indonesian title is sure to keep you on your toes. Developed by Bandung-based studio Arsanesia, Project Unseek is a multiplayer hide and seek game with a cryptically distinctive art style.

With 6-10 players playing at a time, the gameplay goes as follows: Players are split into two teams, either becoming the Hider (Human) or Seeker (Monster). As a Hider, players’ goals are to escape from the woods by completing objectives and avoiding getting caught by the Seeker. As a Seeker, players’ objective would be to either capture the Hiders, or foil their escape plans. As players navigate the woods in pitch black darkness, the catch here would be the limited sight the characters have, making the game all the more tricky yet adrenaline inducing especially with the Seeker close on their tail.

If a cyberpunk setting is more your scene, then look no further! The setting of Rendezvous is essentially a futuristic take on the Indonesian city Surabaya, and blends the elements of both a point and click adventure and stealth action together. Setyo, an ex-agent is forced to face off with threats in the city of Neo-Surabaya when his sister finds trouble at the hands of a dangerous group of cyber runners.

While still actively in development, Developer Pendopo Studios have announced game updates such as implementing VN character style portraits for dialogues. Some gameplay, features, and elements are subject to further changes in the future, but if you are looking forward to getting your hands on Rendezvous, then it’s definitely a surefire addition to your wishlist on Steam.

Ever wonder what it’s like to live the life of a private investigator? With Chinatown Detective Agency, here’s your chance! Fast forward to the futuristic retro Singapore of 2032, and embark on an epic adventure of investigating your very first case as private investigator Amira Darma.

Framed by button panels, the game’s visuals are nostalgically reminiscent of classic adventure times. Players can familiarise themselves with 2D environments based on several locations in Singapore, while using point and click controls. Chinatown Detective Agency does not provide puzzle solutions. Instead, players are sometimes expected to research for information from the “real world”. So if you’re up for a challenge, then this game is definitely right up your alley.

Invite your friends along to craft, build, and fight to your hearts’ content together in Re:Legend. This game features the classic amnesiac protagonist syndrome, where your goal is to start a new life after washing up on Vokka Island, and to find ways to recover your lost memories. However, this certainly won’t be a walk in the park as the world is filled with Magnus and danger lurking around every corner.

As announced by Publisher 505 Games and Malaysian studio Magnus Games, their Kickstarter surprise hit game is scheduled to leave Early Access this year. Players can also look forward to a 4 player multiplayer mode which will be added to the game in the future.

If seeing this suddenly struck you with a sense of deja vu, then there’s a high chance you have heard of Dreadout. So what’s stopping you from trying out Misguided: Never Back Home?

From the foggy and downright eerie atmosphere to its reference to Indonesian Mythology, Jevo Games has developed a game akin to a mobile version of Dreadout where you play as a schoolgirl from a third-person perspective to fight against creepy ghosts and monsters while trying to search for your friends. If this storyline has got you hooked, then you can pre-register Misguided: Never Back Home on Google’s Play Store.