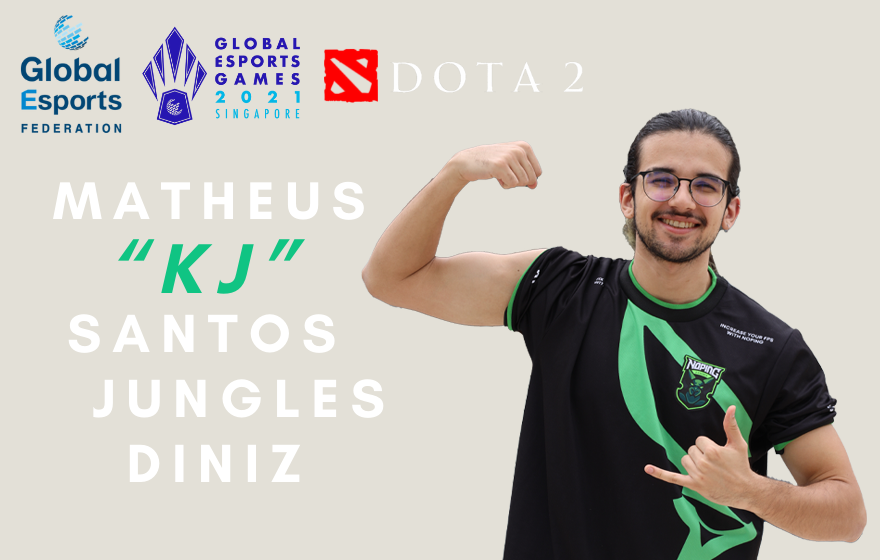 How hard can the life of an esports athlete be?

After all, practice and competition revolve around you sitting on a comfortable chair playing computer games. It may even seem glamorous, seeing your name and face beamed across streams all over the world and on giant screens in arenas filled with screaming fans. And don’t forget the money — how many 22-year-olds can boast of team career earnings of over US$200,000 after just two years on the professional circuit?

But take a peek into the life of Brazilian professional Dota 2 player Matheus “KJ” Santos Jungles Diniz, and one soon realises that the life of a top esports athlete is not what it might seem.

The NoPing e-sports athlete is arguably one of the biggest names featured at the Singapore 2021 Global Esports Games (GEG), which took place just last week. Not only that, KJ’s team actually took home the winning title in his category — Dota 2 Open.

“I think (our performance) was good. We are the same team from DPC, so we had a lot of training before we travelled. We adapted in the game itself. I liked our performance. It was good, especially for one week without playing,” said KJ after the games, noting that even going a day without playing Dota 2 can affect a player’s performance.

The last two years have been a blur for KJ. Before making a name for himself in The International (TI) — the world’s most lucrative esports tournament with a total prize pool of US$40 million — KJ had only played in small tournaments. But following the support’s impressive performances in TI qualification with his former team SG esports, KJ has risen from relative Dota 2 obscurity to become one of Brazil’s most promising esports talents.

But while the rise to Dota 2’s elite group may have been nothing short of meteoric, ensuring one stays at the top would require even harder work ahead.

An average of six to eight hours a day of training and scrimmage — at times longer when competition nears as tactics are discussed and strategies formulated — means there is no rest for the weary.

It is little wonder then that his life revolves around Dota 2.

“You wake up, you get your breakfast ready, go to the PC and like that’s the whole day,” said the Sao Paulo-based gamer.

“And even on your ‘free day’, you’re on your PC and talking about Dota. You’re just not screaming against other teams,” added KJ with a laugh.

KJ, who was the captain at SG esports and current captain of the Brazilian Dota 2 Open team, feels the bond he shares with his teammates — living, training and competing together, is one of the team’s strengths.

“We are just a fresh team and we are super hungry,” he said.

The month of December is especially hectic. Apart from competing in the GEG, KJ’s NoPing e-sports team will also feature in the Dota Pro Circuit (DPC), with an upcoming game on 5 January 2022, said KJ.

The added intensity of this period may be good news for fans as it means the Brazilian team are entering the tournament at the top of their game.

“We’re training a lot, like every day with only one day off per week,” said KJ, whose team are fresh from a 2-0 win over Hokori in the DPC.

“I actually feel like my preparation now for this DPC is harder than for TI because we are playing six games per day right now, while in TI, we played four games a day.”

KJ said that the team’s form and preparation for the DPC were what helped take top spot at the GEG.

Part of the reason for success was that he played with a familiar teammate: Thiago “Thiolicor” Cordeiro, who used to play for SG e-sports.

“And yeah, basically we are very confident because of that. We’ve known each other for some time, so all the adaptations and changes that we may have to make will be done in a very easy way.”

And while the GEG was a great experience for him, KJ is already gearing up for the next game in the DPC, which is as competitive as they come.

“It’s a whole new thing, you know, people get a little bit more nervous and you have to control your emotions more, especially in TI where there’s a lot of emotions because it’s everyone’s dream. like the dream of everyone. But the DPC you play in your home, so everyone’s comfortable,” he noted.

Despite the Brazilian team’s win, KJ will have little time to take in the sights of Singapore. He will be on the first flight home to spend time with his family over Christmas before going back to the grind in the DPC.

“(Being stuck in a hotel), it’s very annoying. Especially because this city is a very beautiful city. So I would like to know where to go to…some tourist places, or just go around and see how it goes. But right now, we can only look from the hotel window.”

But there is no rest for the restless, even during the Christmas break.

“We want to go see our families and then go back to play Dota because we don’t have much time. We’re not even going to have a vacation at the end of the year. That isn’t going to happen for Dota players. I can’t afford not to play Dota from Christmas to New Years’ Eve. I have to be playing.”

In spite of the hectic life of a pro gamer, KJ would not trade what he has now for anything else.

“It was hard at the beginning,” he recalled.

“You have to convince your family (that esports is a viable career) and you have to actually start making some money before you can give up your job. Like I was working at the start of my professional career, then gave up on my job.”

And he hasn’t looked back since.

“And yeah, that’s the life of a Dota player,” he said with a laugh.

Listen up, Game Freak, here’s what we want (and don’t want) in Pokémon Legends!

Meme Monday: 2022 is off to a Marvel-lous start