ultiasia
Home Games That’s it Lolesports, the current tournament format has to go 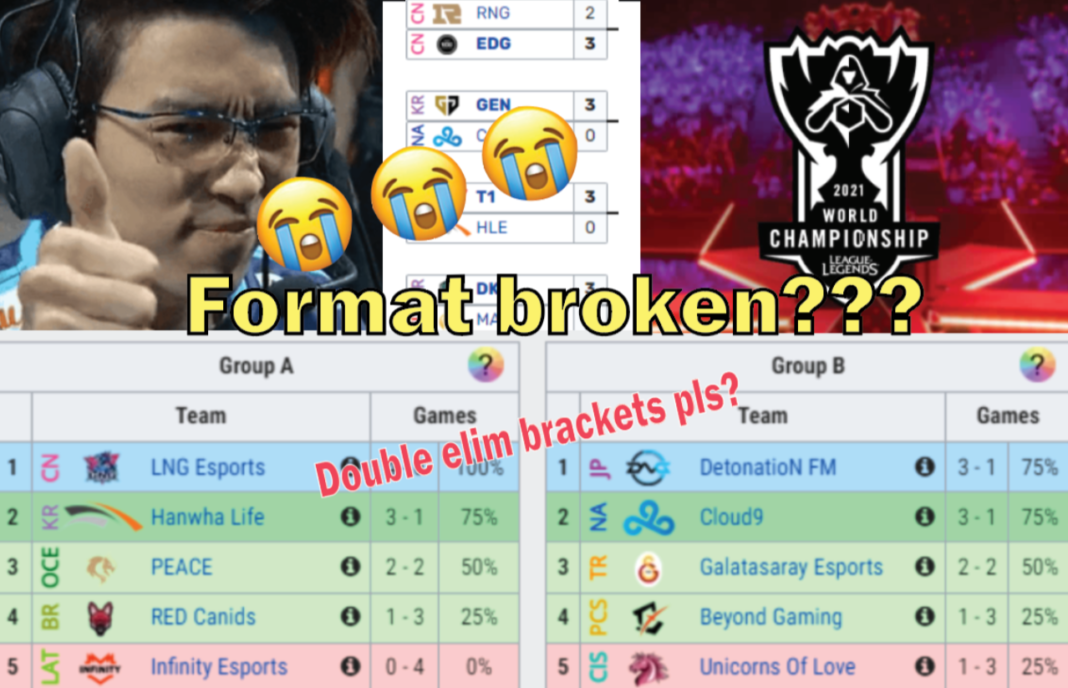 Here we are, staring at the precipice of yet another 3-0 final where the best match of the tournament came from the semi-finals and fans are left dumbfounded that the current single elimination bracket still exists.

Sounds familiar? That’s because it is. If it ain’t broke don’t fix it – goes the saying. But in this instance, Worlds’ tournament format has been broken since 2014, and yet no one is fixing it. Out of these seven years, only one final went the distance while the others were pretty much one-sided affairs.

Burn it all down

When the Worlds song debuted, we didn’t know what to expect. But now we know we want to burn this tournament format to the ground. The narratives at Worlds have gotten staler than bread I left in my travel luggage – and it’s been two years since I last travelled. LCK dominance, Week 1 vs Week 2 performances, NA LUL. Same old, same old and it’s getting way harder to digest than ever.

If the lolesports team truly wishes to have more diverse games, have two larger groups instead. This way, audiences get to enjoy a mix of team-kills and participants play more than one team from each region.

It’s appalling that BO1s still exist in this day and age when it is well established how much variance it introduces in a tournament where the utmost priority is crowning the best team on the globe. One cheesy pick or level one strategy can end a potentially better team. In short, you can get lucky in a BO1.

A Single Round Robin BO3 approach would be much more palatable. It’s almost as if the LPL has done it all year long, for three years running.

The most egregious sin of this year is that lolesports allowed a BO1 Single Round Robin to ever exist in the Play-Ins. While it allowed the LJL to make history and finally qualify to the Main Event, it also highlighted how flawed the format was to even allow that to happen in the first place. DFM went on to go 0-6 into the tournament, as if everyone wanted to see those games.

We get it. The Group Stages are the most fun. And we relish the drama that unfolds during this stage. However, there is absolutely no need to make it span across seven days. Lolesports has the luxury of access to multiple studios around the globe and have demonstrated their use in the broadcast year after year. They have more than enough capability to run multiple streams and casts at once in order to get the games running concurrently.

This is especially so since there isn’t even a LIVE audience to watch these games anyway so there’s no pandering to that. And if viewership metrics are their main concern, we suggest relooking into their established KPIs and identify a better indicator.

Heck, if a rival company that doesn’t give two cents about their own esports scene can figure it out, we’re not sure why Riot Games can’t. It’s not rocket science.

Please, for heaven’s sake, Give us Double Eliminations

It’s not a foreign concept. In fact, these brackets exist in the very leagues that lead up to this tournament. Why then, pray tell, does the biggest tournament of them all not have it?

Without Double Elimination Brackets, Cloud 9 would have not made it to Worlds, much less Quarterfinals. Same goes for FNC, EDG, UOL, DFM, PCE and even PSG Talon. Introducing a possibility for teams that have faltered once in the Playoffs makes for better narratives and most importantly, ensures a better chance at a closer Grand Final.

After making it so far into the tournament, one would think that teams deserve more time to shine in the spotlight instead of being forced home after potentially three games of disappointing gameplay. Instead, teams like DFM got to play just as many games in Groups as LCS and LEC combined in Quarters. What a notion that is.

From T1 to iceiceice, here are the major SEA-related Dota 2 changes!